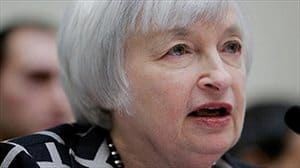 New chair of the Federal Reserve, Janet Yellen, has given the clearest indication yet that the widely criticised ‘Quantitative Easing’ initiative implemented by her predecessor, is likely to remain in place for the foreseeable future.

Despite the recession ending 5 years ago, the US is still in need of significant help because of the high level of unemployment throughout the country, and the low level of inflation.

The number of long-term unemployed remains way above the target set by the Fed, despite the fact that the overall economic outlook has improved.

Yellen was particularly keen to point out that there are still challenges for the economy and that it’s too early to start thinking ending QE, despite the fact that they have been able to reduce stimulus once again for the fourth Fed meeting in a row.

As a result of the announcement, five year yields dropped in New York by three points to 1.65%, whereas longer term yields increased across the board by as much as three points. This is a clear indication that investors predict that shorter terms are going to remain relatively stagnant due to the Fed’s current policy. The performance of long-term bonds shows that it is widely acknowledged that inflation is thought to be capable of accelerating going forward.

Yellen was dismissive when questioned about any kind of timescale related to the interest rate and its potential rise. “There is no set formula and no set timetable” she said when referring to the rate which remains at nearly zero.

She has previously stated that she would expect interest rates to increase around 6 months after the end of the artificial bond purchase designed to boost the economy, however she has never repeated this claim, so has perhaps received clarification that this is a pretty far-fetched prediction for somebody in her position.

There are signs of growth and positivity in the economy and job market, but ‘caution’ is the key word as the Federal Reserve is keen to point out.

Why have a QROPS when I’ve got a SiPP?