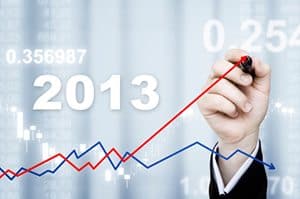 With nine out of every ten stocks in the Standard & Poor’s 500 (S&P 500) set to end 2013 in profit, many of this year’s biggest successes were based in America.

Yet many asset classes from around the world will not end the year in positive territory; something especially true for bonds – with only two in five American bond funds breaking even for investors.

In addition, the emerging market equities have experienced a rough summer as the world’s developed markets dialed back on their outward financial investment; the repercussions of which are still being felt in the fourth business quarter.

This has been especially damaging in countries with a large, country-wide interest and dependence on gold.

Yet as noted, many businesses have succeeded in this market, with the following companies witnessing the largest successes of the year (so far).

Mortgage financier Fannie Mae (FNMA) (+1,010%) increased tenfold in 2013, and now buys up two-thirds of all new home loans (along with government-sponsored Freddie Mac).

The outlook was not so rosy in 2008, when the company lost 98% of its equity value and had to be bailed out by the American Government. However since then, the company has gone from strength to strength, with activist investors such as Bill Ackman competing to shape the company’s future, and naming it a “dynamic situation”.

State-owned Chongqing Changan Automobile Co. (+280.5%) has partnered with Ford, Suzuki, and PSA Peugeot Citroen, and was China’s fifth-largest car manufacturer in 2012. Sales were up 33% last quarter from the previous year, and its adjusted earnings rose 400% per share.

Fidelity Select Biotechnology Portfolio (FBIOX) (+64.0%) has stakes over 100 biotech companies – with its largest (Gilead Sciences) doubling in the first 11 months of 2013.

And with analysts predicting mature American biotech companies should boost sales 18% and earnings over 25% in 2014, the growth shows no signs of slowing.

As another great year for small companies, the Russell 2000 small-cap index, which measures stocks for companies valued between USD 250 million and USD 2 billion, has gained 170% over the last four years.

Of these, Lord Abbett Micro-Cap Growth Fund (LMIYX) (+71.6%) recorded the biggest gains, primarily by focusing on the smallest of the small. Its largest holding is money remittance company Xoom Corp. which boasts 160 employees. After going public last February, its stock returned 67% as of December 2013.

Maximising Retirement Income With A QROPS