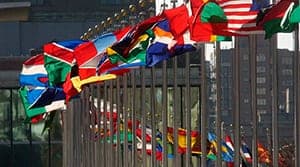 This past week the United Nations faced their first rejection by the Kingdom of Saudi Arabia. The nation turned down a two year position on the Security Council after making claims that the organization had a terrible ‘double-standard’ when dealing with Middle Eastern issues.

The Foreign Ministry released a statement saying, “Saudi Arabia … is refraining from taking membership of the U.N. Security Council until it has reformed so it can effectively and practically perform its duties and discharge its responsibilities in maintaining international security and peace,” said a Foreign Ministry statement.

The Saudi government, along with its citizens, are angry about the ongoing catastrophes in Syria and the lack of intervention by the UN. The two main opposing views from Russia and China versus the United States and the majority of the West have not allowed for a progressive peace process to begin ending the bloody civil war.

“There are people being killed every day, every hour. And the Muslim world is very angry because we don’t see any action or any strong stance from the Security Council towards this situation,” said the chairman of the Shoura Council.

Saudi Arabia have also condemned the United Nations for being inactive in the Israeli-Palestinian dispute over the illegal Israeli settlements in Palestinian territory. They have voiced concerns against one of their oldest allies, the United States, for not being more pro-active in resolving the matter in a timelier manner.

While some Arab states support the Saudi decision, others have asked they reconsider.

The Arab Group, which includes all Arab nations that are members of the United Nations, have released a statement requesting that Saudi Arabia retain their position. The statement said, “”We hope that they (Saudi Arabia), which are amongst the blessed who represent the Arab and Islamic world at this important and historical stage, specifically for the Middle East region … maintain their membership in the Security Council.”

Many critics are questioning why the Saudi Arabian government would choose to make this decision after working for this position for the past 3 years. They also question whether leaving their seat empty would be more effective that participating in shaping the Security Council agenda.

It is still unclear whether the Kingdom will heed the advice of their Arab counterparts.

Secret Corner Of The Med Where World’s Wealthy Live

US Shuts Down But Tax Collectors Still Working