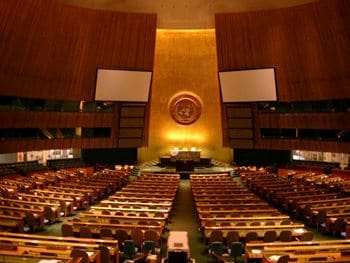 Former Portuguese Prime Minister Antonio Guterres is the favourite to take over as United Nations secretary general and will replace the outgoing Ban Ki-moon early in 2017.

The deafening cries of who and so what may ring around the world – but not so loud as the critics who demand if the world still needs the United Nations.

After all, in war after war, the UN has failed to broker let alone relieve the suffering of millions of citizens.

The desperate straits of non-combatant men, women and children in the Syrian city of Aleppo are the latest victims of the lack of reaction by the UN.

The world is standing by while the psychopathic Syrian and Russian armed forces raid terror in the form of fire and bombs down on the hundreds of thousands of people living in the city who have done no more than end up on the wrong side of a line demarking government from rebel territory.

Those entrusted with protecting those who cannot protect themselves on the UN Security Council are actually among the worst perpetrators in the living hell of Aleppo.

Britain, France, the US and Russia all sit as permanent members of the council. All have some part to play in what is going on by supplying or dropping the bombs.

What will Guterres do about this?

To outsiders, the UN is simply a talking shop where nothing gets done. A place where superpowers lie and cheat to gain approval or veto action against their economic interests.

Voice of the downtrodden

Would the world miss the United Nations if the building suddenly disappeared from New York? Probably not.

Would the civilians suffering in Syria and other disparate black spots where conflict reigns notice?

Guterres won his job with 13 votes in his favour and two abstentions out of 15 envoys entitled to take part in the election and in double quick time to the surprise of everyone. He is expected to be confirmed in his new role within 48 hours.

He vows to be the voice of the downtrodden, but how loud his voice becomes and whether anyone with real power bothers to listen is to be seen over the coming years.