Time To Make A Call On Vietnam 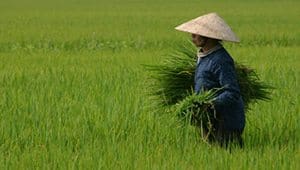 Foreign investment in Vietnam is starting to pay off as the nation showed the fastest export growth in the Asia-Pacific last year.

Despite a trouble past, Vietnam now has a stable economy and government, a balance of trade well in the black and exports up 15.4% in a year.

The country is likely to reap the benefits of continuing export success mainly based on making mobile phones and electronics, says investment firm Barings.

And although markets in the region slipped back last year, Vietnam and Indonesia are worth watching for investors, suggests the firm in a recent analysis of the region.

The key to prosperity in Vietnam is foreign investment pouring into the former war-torn country with a stricken economy as recent as the 1970s and 1980s.

Multinational firms have piled in around £6 billion a year for the past five years, building factories and improving infrastructure in Vietnam.

A notable investor is electronics giant Samsung, which is building a second plant in the country which will generate around 50% of the firm’s capacity to make mobile phones by 2015.

The government is also supporting internal investment, says Barings, by helping banks to lend and kick-start the economy.

SooHai Lim, investment manager of the Baring ASEAN Frontiers Fund, said: “Vietnam is attracting all the attention in the Asia-Pacific market and is one of our biggest holdings. We can see the government acting to tackle bad debt.

“Corporates in the country have seen corporation tax drop 3% to 22%, and that’s going to fall to 20% in 2016 and will help companies retain profits for distribution as dividends and investment.

“We also believe the improving economy in Vietnam will help other nations in the region move towards a recovery. Indonesia, Thailand and the Philippines fell last year but are climbing back and we are looking forward to less volatility and an improving political background to power further growth.”

Besides Vietnam, another tip from Barings for investors is Indonesia – but this will depend on the outcome of the upcoming presidential election in July 2014.

Jakarta Governor Joko Widodo is a key nominee and a supporter of economic and political reform.

Tipped to win, the firm believes the country’s economy will benefit if he takes office.

“After some poor fiscal management, steps have been taken to improve matters,” said SooHai. “For an emerging economy, investors should be comfortable with a deficit of around 2.5% of GDP.”

Global House Prices Are Bouncing Back