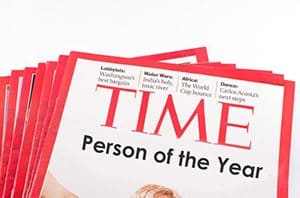 As the year ends, it is a time for festivities, and also, Time’s Person of the Year award.

The finalists have been officially announced and while some of the candidates were anticipated, others have come as a complete shock. The magazine selects the winner based on the amount of media coverage that individual has received throughout the year.

According to the website, the final contenders for the Person of the Year title are listed below in alphabetical order.

Although he is not a well-liked figure in the world, he has made headlines across the globe for multiple reasons this year. The last story to hit the stands regarding Syria’s President was his use of chemical weapons against his own citizens. This story was followed up by his compliance in destroying all chemical weapons in order to prevent intervention by foreign governments.

Jeff Bezos is the only name on this year’s list from the tech industry. One of the more popular stories about Bezos was his announcement that as of next year, Amazon will be using drones to deliver goods bought on the site across the country. He also made a widely publicized purchase of the newspaper, The Washington Post.

For those who are up-to-date with matters of the White House, this name should not come as a surprise. Ted Cruz is a junior senator from Texas who was the mind behind the government shutdown, in addition to his attempts to remove funding for ‘Obamacare’.

It is difficult to browse through the internet without seeing a scandalous story about Miley Cyrus, and that is why she is a finalist. The pop singer has received a number of awards this year and is so frequently discussed, that Google search engine has claimed that her name has been the most commonly searched term this year.

Earlier this year, Pope Francis replaced his predecessor Pope Benedict XVI after his surprise resignation. Since the new Pope has taken his place as the leader of the Catholic world, he has been making headlines for his stance against poverty and his more liberal nature than many Popes from recent history.

The US President is not a man who needs an introduction, however, it should be noted that this is third time on the list. He was also Time’s Person of the Year in 2008 and in 2012. This year, the President was a hot topic due to his reform of the US healthcare system.

Other finalists include Hassan Rouhani, the current President of Iran and Edward Snowden, the former NSA contracter.