Take A Tour Of The World’s Largest Commercial Jet 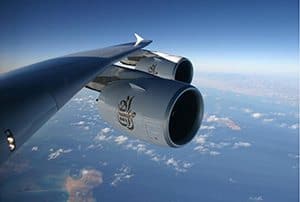 Dubai airline Emirates has set up an online 360 degree inside view of the Airbus A380 double decker jet.

The ‘street view’ is part of Google Maps and lets anyone take a virtual tour of the world’s largest commercial jet.

From the comfort of your own smartphone, tablet or computer, you can take a peek inside from a virtual tour of the lounges and bars – including the spa showers.

Google has even snatched a pilot’s view from the flight deck, one view even the wealthiest passengers miss out on.

Emirates asked Google to put images of the plane online after the search giant completed a similar virtual tour of the Burj Khalifa, the tallest building in both the world and Dubai.

This year marks the airline’s fifth anniversary of flying the giant jet, which has an outstanding flight safety record compared with the problems rival Boeing’s Dreamliner is experiencing with electrical faults.

Everything about the Airbus 380 is super big. With a wingspan of 80 metres, the jet can carry 517 passengers over 15,000 kilometres without refuelling. The Airbus is reputedly 20% more fuel efficient that the Boeing Dreamliner.

Emirates flies more A380s than any other airline, with 35 aircraft in service and 55 more on order.

The double-decker has moved more than 18 million passengers and their luggage more than 265 kilometres around the world in 20,000 round-trip flights to 21 regular destinations.

Dubai International Airport in the United Arab Emirates (UAE) is also the first, and currently only, airport with a dedicated A380 terminal, which opened in January 2013.

As new planes arrive, Emirates is extending the A380 list of destinations to Brisbane, Australia; Los Angeles, Mauritius and Zurich.

Over the five years of Airbus 380 flights, Emirates has compiled some astonishing facts: