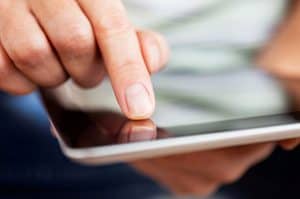 People are taking tablets to cure their technology ills rather than buy new desktop computers.

Sales of personal computers are falling worldwide – with the red line heading down for five quarters in a row.

The depressing trend for manufacturers is the worst downward sales curve in the history of personal computers.

In the second quarter of 2013, global sales totalled just 76 million units – a 10.9% drop compared with the same period a year ago, according to research company Gartner.

Makers blame the growing popularity of portable smartphones and tablets for denting their sales.

The smaller gadgets are becoming the technology of choice in many emerging economies where personal computers are considered for business or old-school applications.

“Tablets are cheaper, portable and do more or less everything a personal computer can do, so they are the first device most people buy in emerging economies,” said a Gartner spokesman. “Not only that, but because they cover many of the functions of personal machines, tablets are taking over in more developed economies as well.”

The personal computer market is a head-to-head contest between US computing giant HP and Chinese manufacturer Lenovo.

The top five makers account for 60% of the market – the rest is made up of hundreds of firms, including Apple.

The definition of personal computers includes desktops and laptops but not mini notebooks or larger tablets, like the iPad.

The IDC statistics revealed an 11.4% plunge in personal computer sales for Q2 2013 compared year-on-year. Total sales were put at just shy of 76 million.

“The market performed better than we thought, but must still show innovation with products that can compete with tablets and smartphones, not only on applications but price,” said an IDC spokesman.

Meanwhile, Gartner argues that personal computer sales will continue to decline as users want anytime/anywhere access to the internet.

The firm expects personal computer shipments to drop at least 10% in 2013, while tablet sales will grow by two-thirds.

“Customers want the internet on their own terms, wherever they are,” said a Gartner spokesman. “The goal is easy access to the web to find and share content with their network of friends. This is a worldwide trend in every market.”