Standardised Packaging for Cigarettes by 2015 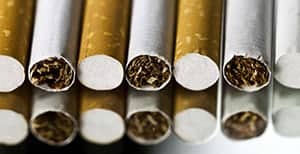 Cigarette smoking has been proven to cause a number of diseases, the most fatal being cancer.

Campaigns have started time and time again to have the products banned, to no avail, but a new tactic may be implemented by the UK government in the next two years.

A new public health policy may be instated banning all designs on cigarette packaging, meaning that all cigarette packs will come with the same plain packaging.

The policy was reintroduced after previously being dropped.  The renewed policy was introduced by Lord Faulkner who was backed by a large number of medical professionals thus winning the vote to have it reconsidered.

Pending a report that will be submitted by renowned doctor, Sir Cyril Chantler, who is also an administrator at the National Health Service, will be reviewing evidence and present by March of 2014.

If the research is proven accurate, as the anti-smoking lobbyists claim it is, all packaging will by standardized before the election in 2015.

Lobbyists, along with medical experts, have been requesting that the government take initiative against smoking for many years as their research indicates that flamboyant packaging encourages and entices younger members of the UK community to begin smoking.

Lord Faulkner explained, “Tobacco packaging is the last way in which the tobacco industry can advertise and market its lethal products; we have now stopped all conventional advertising and the retail display ban will come into in full effect in 2015. The industry likes to pretend that packaging is not advertising, but in fact it is very carefully designed to appeal to its target markets.”

As the government has been attempting to distance itself from interfering with work of large corporations, this endeavour has to be undertaken in a specific manner. The evidence review has been put in place in order to prevent legal backlash from the numerous tobacco companies in the country.

This has caused many members of the public to speculate on the governments true motives as this evidence was presented one year ago. All three major political parties have members and supporters who wish to see this action undertaken by the government and are now adding more pressure to see cigarette packaging stripped of their colours once and for all.

Although many people do support this action and want to prevent harm from coming to the young public, the Prime Minister of the UK, David Cameron, has been accused of having the opposite sentiment.

Taking Your Pension Offshore With A QROPS