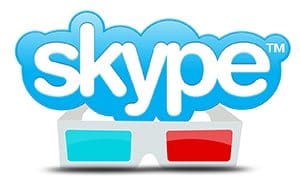 Skype me! If the online video chat software giant isn’t trying to develop a way to beam a 3-D you into work while you stay at home.

Executives at the Microsoft owned firm revealed the astonishing news at a party to celebrate 10 years of Skype.

The plan is to send a body double to the office over the internet for workers who cannot travel to meetings.

However, although the announcement has grabbed the headlines, Skype has confirmed the technology is not available to beam you up and around the world – and probably won’t be for some years.

“Our scientists and software developers are looking at 3-D video capture and sending the signal to 3-D screens,” said Microsoft’s corporate vice-president for Skype, Mark Gillett.

Working in the lab

“TV and computer monitors are coming to the market, and, of course, cinemas are buying into 3-D in a big way.”

The problem, says Skype, is the number of cameras needed around a computer and calibrating them to transmit and reassemble the image.

So forget staying in bed while a hologram you goes to work and picks up your salary, because it’s not going to happen for a good while yet – if ever.

“It’s a lab project at the moment,” said Gillett. “We have a prototype up and working, but translating that into a consumer product is a long way off.”

Skype’s announcement came as somewhat of a surprise to the industry as two big players have confirmed they are putting 3-D on the backburner for the time being. Disney and the BBC have both shelved plans for 3-D programmes.

Retailers are also seeing a drop in demand for 3-D televisions in the UK and Europe.

Nevertheless 3-D champion and pioneer, film director James Cameron has told the BBC that they are facing an inevitable switch from 2-D to 3-D and that they should embrace the technology.

“It’s the glasses that are the problem,” he said. “Once scientists have figured out how to show 3-D without the glasses, the technology will really take off.”

Games consoles are another big application that could lead the way in 3-D technology – and Skype is well-placed to piggy-back any developments as Microsoft also produce the best-selling X-Box gaming machine which is already linked into the internet via the system’s built-in wi-fi.

Skype also announced that a new HD 1080p version of the software will soon be available – and that includes on products other than Microsoft servings.

QROPS, Filling In The Blanks Your IFA Won’t Tell You