The Salty Ocean is a Surprising Home for Fresh Water 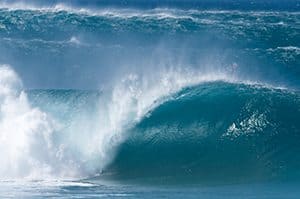 A team of Australian researchers, led by Vincent Post, have revealed that a large body of water with low salinity levels has been located.

This past Thursday, the researchers from Flinders University in Australia, have announced that approximately 120,000 cubic miles of water has been found hidden under the sea.

Their paper that was released in a science and medicine journal, Nature, states that this distance spans across, or in this case under, the continental regions of Australia, China, North America and South Africa.

This discovery has many positive indications for solutions to the impending depletion of fresh water sources. It has also provided security, in this aspect, for generations to come.

The UN Water sector has indicated that at the current rate of water consumption, which has dramatically increased to double previous quantities due to industrial and agricultural applications, that by the year 2030 almost half the population will be forced to deal with limited water supplies.

Vincent Post commented on the matter saying, “Freshwater on our planet is increasingly under stress and strain so the discovery of significant new stores off the coast is very exciting. It means that more options can be considered to help reduce the impact of droughts and continental water shortages.”

However the question on everyone’s mind is, how did the water get there?

Specialists have studied the matter and have concluded that the freshwater reserves have been stored under the seabed hundreds of thousands of years.

According to scientists, as the seas in that time were much more shallow than they are today due to the fact that much of the sea water was trapped inside frozen glaciers, rainwater could fall on to the group where it would seep through and come to be stored in aquifers.

When the ice caps began to melt sea levels subsequently rose and the aquifers containing the freshwater were stored safely under the sea bed thanks to a newly formed layer of sediment to protect it.

Post says that this is not a rare occurrence, “By combining all this information we’ve demonstrated that the freshwater below the seafloor is a common finding, and not some anomaly that only occurs under very special circumstances.”

However, he said that the extraction would not only be costly, but it would need to be done with care so the fresh water does not mix with sea water.

He finally added that although this is not unheard of in nature, it will take thousands of years before the same process is repeated in nature and thus the water must be treated as a limited resource.