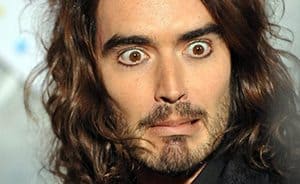 West Ham fan and stand-up comedian, Russell Brand has voiced his intention to sue London tabloid The Sun on the basis that his face was on the front of their paper accusing him of hypocrisy over his really rather vociferous opinions on tax avoidance.

Brand has more or less taken it upon himself to become the spokesperson for the disenchanted generation, however judging by those that choose to share his rants on Facebook, his appeal stretches only as far as those with no more than a passing interest in politics, and a penchant for his thesaurus recited vocabulary.

Brand has often flirted with irreparable damage throughout his rather odd career, however, the millionaire lothario may well have taken things down an irretrievable pathway with his foray into politics this time around.

The Sun readership are coincidentally the niche market for the former Horrors enthusiast, who found his way back into the public’s vague consciousness through a stint on Big Brother’s Little Brother having watched Faris Rotter and co, and told his stylist to pop down Topman.

The niche certainly seemed to enjoy his offerings on the E4 show, and from there he has starred in ok films, been kicked off of Radio 2 for the now tiresome Andrew Sachs saga, and probably done lots of other interesting and funny and crazy things over the years. And got married to Katy Perry for a month.

The classy East Londoner, for his next trick, suddenly became incredulous with his contempt for modern politics and told the nation not to vote. There’s not too much else to say about that one. Robert Webb, star of the C4 hit series Peep Show, pretty much nailed it anyway.

But not settling for a quick blast on Newsnight, Russell decided to start his own YouTube channel called “Trews” or something like that. It’s a name made up of two words which are ‘News’ and ‘True’, the idea being that Russell takes a look at the pages of British or American newspapers and teaches us how to read behind the headlines. It’s gripping stuff and if you ever studied media studies at college it really makes you feel all sentimental, really takes you back.

One of his latest opinions relates to his insistence that the government come down hard on those avoiding tax. His new book which is called “Revolution” insists that if company owners or public figures don’t pay their tax, we should go forth and remove their assets before distributing them to those that work for these avoiders. The Robin Hood-esque imagery is rather fantastic admittedly, however when The Sun allegedly uncovered that Russell’s multi-million pound rented mansion in London is let through a company with accounts in one of the favourite destinations for avoiding huge tax on income, the British Virgin Islands, Russell was so angry.

Russell previously sued the paper for saying he had an affair during his time with someone called Jemima Khan, he won which means he definitely didn’t have an affair. This time though, it is currently unclear whether the guy his ex-wife once described as “a mixture of Jesus, Charles Manson, Elvis and Jim Morrison” (not just now Katy), really has a case here. Time will prove everything.