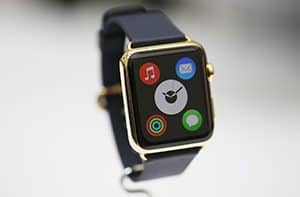 According to testing results within a leaked report, the Apple Watch battery life will give a maximum of around 19 hours use, while more intense usage will see the battery run out in around two hours.

The Apple Watch, which supposedly lands in March, has for a long time been fated as the make or break device for Apple as the tech super giant looks for a new foothold outside the slowing smart phone and PC markets.

Geek forums and Apple enthusiasts have been full of discussion regarding predictions for the Apple Watch battery life, and it would seem most of the predictions are likely to be proved right. Of course, it wasn’t too hard to imagine that battery life would be less than impressive. All the iPods and iPhones have hugely underwhelmed in this department, so it seemed fairly logical to think that the watch would be no different.

Time is my Everything

The laughable two hour battery life for those using the device for the purpose it is intended (hint: it’s most definitely not about telling the time) will be enough to make most people steer well clear, and it could sadly mean a drop in the share price too.

Bringing a ‘new’ product to market rarely goes smoothly for Apple, but this time around there is the added pressure of knowing they are late to the party. Fitbit, Samsung and Motorola already seem to have a relative handle on the market, and whereas with smart phones Apple usually wait for everyone else to make a move and a million mistakes, then come in late to save the day after learning from their rivals’ errors. This time there is no such luxury for Apple.

Industry experts seem split between those that think the Apple Watch will be a success and those that foresee great difficulty ahead. Time will prove everything…. Literally.

Get Intimate Texts from a Computer for just £16.50 per month!