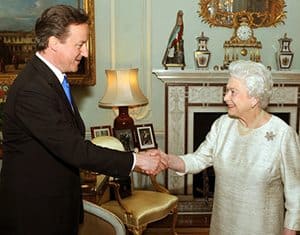 Prime Minister David Cameron and his coalition counterpart Nick Clegg of the Liberal Democrats today saw the Queen deliver the final 11-point bill of the year, and their final bill before next year’s General Election.

As with the 2014 Budget, delivered in April, it is pensions that provide the main focus of the announcements given by Her Majesty. Changes to both the annuity schemes alluded to in April, and workplace schemes are now moving forward.

In addition, voters will now have the power to be able to call elections at a local level for MPs found to be up to no good. Controversially, fracking companies have been given the green light to press on with little or no limitations imposed, a move much to the distaste of Greenpeace who staged a protest outside David Cameron’s home in Oxfordshire.

A full rundown of the measures announced are:

All in all, nothing within the bill has particularly caught the imagination, the pension reforms were already announced in April, and the other bills are unlikely to create many waves as the coalition looks to gear up towards the general election in May 2015.

Of particular interest is that both the NHS and immigration were completely overlooked in the bill. These are prime issues for those in the country with the motivation to vote (less than 30%). It has been UKIP’s focus on immigration that has pricked the ears of the common voter, and David Cameron will need to do some serious thinking – and perhaps some image remodelling – if he is ever likely to be able to connect with Britain’s new kind of voter.