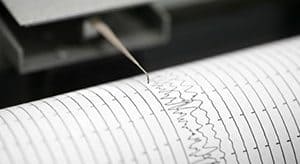 As New Zealand’s Wellington parliament building was truly shaken to the core by an earthquake, engineers have revealed what is designed to be the country’s safest building.

The brief was to shake off a magnitude-nine earthquake – a force of nature expected to occur once every 2,500 years.

The designers came up with the NZ$600 million Pole 3 substation at Wellington.

The substation is a link in a chain of energy generators that criss-cross both the New Zealand north and south islands.

The Hayward substation is built directly above a fault in the earth’s crust that triggers the nation’s volatile seismic activity.

The energy firm Transpower’s CEO Patrick Strange commented that if another earthquake struck during the ceremony, the cavernous substation was the safest place to be.

That’s because the piles for the foundations go down 100 feet into the bedrock and would take a mighty big quake to shift them.

The spring like foundations of the substation let the valve hall move up to a metre in an earthquake.

All the generating equipment is ceiling-suspended and can swing within the hall if disaster strikes.

The last earthquake in Wellington – just three days before the grand opening of the substation was rated 6.5. The city shuddered and experienced some minor trauma. The valve station did not even tremble.

Builders Siemens are pleased with the project – but claim they got their sums wrong and lost money during the construction. They are tight-lipped about just how much.

“Nevertheless, this is a project showcase for many other countries in the Asia Pacific rim that suffer from erratic seismic activity and want to protect their energy supplies,” said project manager Karlheinz Springer.

“In the last quake, shelves in my room fell down and the earth definitely moved under my feet. It’s easy to see why New Zealand and other countries need this sort of facility.”

The Pole 2 and Pole 3 substations are both hydroelectric generators. New Zealand can run on just one, but, says Transpower, the two balances supply and demand across both islands.

“This new substation lets us generate and store a huge amount of electricity and then lets us send it north,” said Strange. “The government would have to look at gas or coal fired power stations on the north island without this facility.

“We have already generated and transmitted electricity equivalent to about 80% of Auckland’s average winter load while running tests at the Hayward substation.”