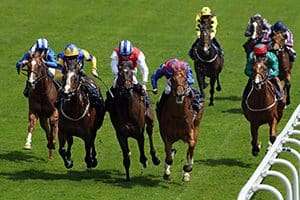 Police in Liverpool are investigating the release of a YouTube video which appears to show an overweight man in an ill-fitting suit shoulder barge an old-age pensioner to the floor. The man who has been described as a ‘sad-act’ continues to march down the road triumphantly, apparently in a proud display of his bravery, although most witnesses and viewers around the globe have been less impressed.

The baggy-suit-wearing individual was on his way to Aintree, presumably to watch some horse racing, although sadly events such as the Grand National, Glorious Goodwood and the Cheltenham festival have now become synonymously associated with the attendance of people of this intelligence level, meaning that many race enthusiasts tend to leave these mainstream racing events well alone.

Aintree attracted 150,000 people over the three days, and although there were no arrests, this display of aggressive behaviour towards a senior citizen puts a disappointing slant on what was otherwise a relatively peaceful event.

The unidentified video maker, who can be heard sniggering at his friend’s pensioner assault, is not thought to be facing any charges, however the assailant, whose suit is said to have been bought from Primark just hours before the event, will be up on assault charges if he is found, which he almost certainly will be.