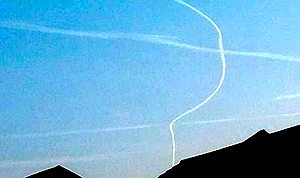 After pictures emerged of a contrail left by a seemingly indecisive or confused pilot over Portsmouth, England, air traffic controllers have been unable to confirm exactly why the plane appeared to suddenly detour across the sky.

The picture was captured at 7.20am by a resident of the charmingly named Southsea, Florence Lehmann. She commented that “It’s really weird.” Contrails such as the one pictured are often found above morning skies across the globe, with conspiracy theory enthusiasts renaming them “Chemtrails” and theorising that they are in fact poisonous chemicals, sprayed deliberately into the atmosphere by the world’s leading governments.

Portsmouth – most notable for having the largest teenage pregnancy rate of any city in Europe (city, not town) – was also the subject for another strange sky-bound phenomenon when last week a grey object which looked similar to a flying saucer was photographed in the sky above the southern island.

Upon further investigation, the Met Office ruled out any type of weather instrument in the area, and many choosing to reside in the coastal destination believed that UFO’s could be looking at their city as a prospective new home.

It later emerged that some students had photoshopped the photo’s which appeared on Twitter to help to promote their science fiction and fantasy festival. It is not known whether the number of festival attendees increased as a result of the imaginative social media campaign, but residents of Stamshaw – a district of the city – are said to be particularly disappointed at the hoax.