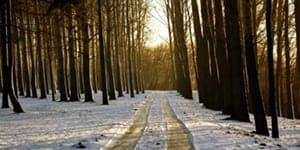 In the town of Rjukan in Norway, the day has, literally, gotten a little brighter.

Tucked away between mountains in a hidden valley, the town only gets exposure to sunlight half of the year. During the winter months, the mountains cast massive shadows across the entire town blocking all sunlight at all times of the day.

In order to counteract this gloomy tendency of nature, a 100-year-old idea has finally come into play. Three giant mirrors, measuring 183 square feet, were installed on to the top of these mountains to capture and reflect the sunlight into the town centre.

The idea was initially thought up by Sam Eyde, the same man who built the little town to provide a home for the employees of the hydroelectric plant.

The idea for these mirrors died down for a long time due to a lack of technology, but in 2005 Martin Andersen, an artist and a native of the town, obtained generous funding, in addition to some public money, a total of 500,000 pounds was raised for the mirrors.

However, they are not just ordinary mirrors, they are controlled remotely by a computer and have the capability to mimic the sun’s movement in order to capture the greatest amount of light.

In order to install these mirrors, a helicopter lifted the equipment 450 meters above the town centre on to the top of the mountain where they were set up.

The mayor of the municipality, Steinar Bergsland, said “A hundred year old idea has become reality today.” He also said during his speech that he hoped that the mirrors would not only provide light for the town but attract tourists there as well. He added that the little town is, “where the impossible becomes possible.”

The hydroelectric plant that was built near Rjukan has been a tourist attraction as is location where Hitler’s attempt at developing the atomic bomb was thwarted.

In celebration of this event the residents of Rjukan gathered in the town centre for festivities. Many gathered lounging in the sun while sipping fruity drinks, others played sports like volleyball on an impromptu sand court. Many children of the town painted their faces with yellow suns and cheered while waving Norwegian flags. 1,000 people collectively celebrated what many others take for granted.

Prior to the mirrors being installed, inhabitants of the town had to take a cable car ride to the top of the mountain in order to get exposure to any sunlight.