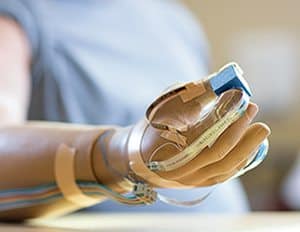 A new technique for creating purpose-built prosthetic hands for amputees has emerged from a British company using 3D scanning and printing.

Open Bionics claim to be the pioneers of the technique which, it is hoped, will offer child amputees the chance at leading a relatively normal life.

Initially a tablet is used to scan the amputated limb, the details are then fed into a programme which commands the 3D printer. This process takes nothing more than a matter of days from start to finish. The most significant aspect of the technological breakthrough is the cost involved. The price of a 3D prosthetic will be around £1,200.

Any prosthetic options currently available range from between £10,000 to £70,000, which, when you consider that child growth requires a new prosthetic on average every 12 months, means that the robotic hand option is often unavailable to the majority.

The Bristol-based tech company admits that the model is still being fine-tuned and tweaked to ensure it is fully functional before going to market, but this is predicted to take just a few months.

UK Pensions in the USA Don’t Work, the Only Way is QROPS