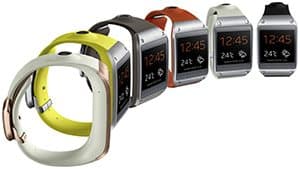 As scheduled, Samsung has made an exciting announcement where they revealed not one, but two new smartwatches.

The Galaxy Gear 2, which is the original Galaxy Gear’s successor and the Gear 2 Neo are the names of the upcoming released. This indicates that Samsung sees growing potential for the smartwatch market.

Further details of the new devices will be announced later this week at the Mobile World Congress in Spain, but the technology giant has released the specs of the watches to give consumers a better idea of what they can expect.

The new smartwatches have come with a big hardware change and some real upgrades for people to enjoy.

Both watches have similar hardware that features a 1.63-inch, 320×320 pixel resolution on an AMOLED screen. Both have a 1GHz dual-core processor with 4GB of storage space for the user to take advantage of.

However, only the Galaxy Gear comes with a camera which is 2 MPs that can shoot full HD.

In addition to all these features, both watches are made to suit a fitness enthusiast. A pedometer and a heart monitor come featured in both models, along with trackers to monitor all physical activity. The best part is, they do not need to be synced to your smart phone to get information on walking and running activities.

The most criticism that the previous model had faced was the quality of battery life was quite poor, which Samsung has promised they have adjusted. They claim that the new models can last 2-3 days with normal usage and 3 days more if the user is not a heavy user. The battery that the watches will feature is a 300 mAh Li-ion.

The final concern is that the pricing will be the same as the first Galaxy Gear, which did not work well with the market and had to be adjusted.

Aside from the cost, many Samsung fans are excited to see what the watches will look like and are eager to get a taste of these new devices themselves.