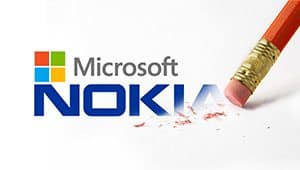 Microsoft has announced that their next line of smart phones will NOT feature the legendary device manufacturer Nokia. Bill Gates’ heavy hitters acquired Nokia in April 2014 in a deal rumoured to be worth in the region of £4.6 billion.

But, with the latest announcement it seems that the brand name Nokia – synonymous with the mainstream popularity of mobile phones and the sturdy 3310 which everyone in the world owned at some point – is set to never feature on a device again.

The new Microsoft models will use the “Lumia” branding but will now be called “Microsoft Lumia.”

While Nokia will still have a brand to an extent –for their non-mobile division not owned by Microsoft – the decision represents the end of an era and huge fall from grace for the Finnish company which were just 10 years ago at the top of their game.

Although as part of the arrangement to purchase the mobile division of Nokia, Microsoft agreed to use the brand name for 10 years. They have reneged on this area of the deal within six months.

The announcement comes as the software giant has also confirmed that 18,000 staff will be let go, the vast majority of whom were employed by Nokia before the takeover.