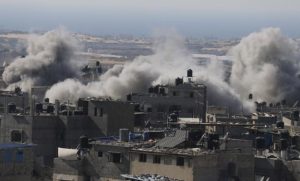 Israel has attacked civilians in Gaza for the third successive day, as aerial strikes continued. The punishing offensive this time took the lives of eight members of the same family, five of which were just children.

The assault from the air has been launched with the express intention of putting a halt to ongoing rocket bombardments aimed at Israeli cities from the ground. It is, however, unfortunate that the Hamas militants have remained largely unaffected by the misdirected retaliation from Israel, for both the families of the dead and the Israeli families, who still remain a target for the militants.

So far since the latest airstrikes began, 61 Palestinians have lost their lives, 50 of those were civilians. Israel claims that over 200 rockets have been fired at the country’s major cities over the course of the last week. There have been no serious casualties form the rocket attacks, however one did hit a small grocery store causing it to close, and one rocket did manage to land on the outskirts of Haifa.

Hamas openly admitted to firing six rockets at Israel on Thursday morning, however once again there were no reported casualties from these attacks. Israel has targeted over 550 sites during its retaliation, however a large percentage of these have been homes and have cost families dearly – although Israel has claimed these dwellings represent command centres. It is not thought that the Hamas militants have much in the way of command centres due to the misdirected use of their limited rocket-launching capabilities.

This represents the worst Palestine-Israel violence since 2012, when there was an eight day war costing hundreds of innocent lives. The attacks have been enough to attract attention from the UN, with Secretary-General Ban Ki-moon set to speak with the Security Council on Thursday.

The US has backed Israel in the conflict – a country historically keen on retaliatory methods- while both the European Union and The UN have pleaded for restraint from both parties.

Israel – widely assumed to have a large scale nuclear and biological weapons program – saw one of their nuclear production plants at Dimona targeted by Hamas with three separate rockets, however none of these were successful.

Israel attacked over 300 targets during Wednesday as it sought to quell the threat by targeting rocket launching sites, bridges and tunnels thought to be used for infiltration and weapons transfer.

However, one rocket sadly killed the driver of a media vehicle reporting on the conflict, the words “TV” were clearly visible on the car. Four people also lost their lives while in a coffee shop too, but it is not thought the coffee shop was being used for any military purposes before it was bombed.

The build up to the conflict began around three weeks ago when three Jewish students were kidnapped in the West Bank. These students’ bodies were found last week, before a Palestinian teenager was also killed in the holy city of Jerusalem having been abducted.