Is this the end for Clarkson? 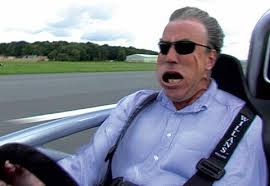 The future of the popular BBC series Top Gear hangs in the balance today, as their star presenter Jeremy Clarkson has been suspended for allegedly punching a producer in the face.

Clarkson, who also writes a column for British tabloid “The Sun” has had a media career which has never exactly been short on controversy, but it is thought the BBC – who have repeatedly been forced to warn the 54 year old about his behaviour – may have no choice but to axe him.

The remaining three episodes of this series will be scrapped, leaving fans of the show and its £3 million-per-year presenter with a void that will need filling. An online petition to reinstate Clarkson has thus far managed to get over 150,000 signatures in just a day, a figure which you would expect to double in the next 24 hours.

The BBC has a duty to commission and air a range of programming that caters for the broadest spectrum of taste. Many find Clarkson’s irreverent, slightly phobic on every level, temperamental take on the world to be extremely entertaining and appealing, others think he has watched too many episodes of Alan Partridge, and the rest are offended and want him removed from their screens. It would appear this final, perhaps over-sensitive group, are in the minority.

Top Gear is sold to over 100 countries and Clarkson, together with co-presenters James May and Richard Hammond, are global celebrities without question. The reason for this must surely be the amount of controversy the show and its presenters (mainly Clarkson) court with unbounded abandon.

From stating that people who go camping in caravans are idiotic and boring, to cracking wise about lorry drivers murdering prostitutes, Clarkson has never held back when given the opportunity to voice his opinion. But it would seem that in the last year or two some of the powers-that-be within the BBC have begun to tire of his slightly pompous, off the cuff mid-seventies perspective on a matter of subjects, or maybe it’s just that he has become even more outwardly bigoted and intolerant in his old age.

In May last year, Clarkson was filmed using the most offensive racist slur that exists in England which refers to black people. He was given his final warning. Before that he referred to an Asian as a “slope” and also offended Mexicans (referencing them as lazy), Argentinians (Falklands references), the disabled (using their parking spaces), Albanians (stating they are either all mafia or car thieves), the mentally ill (asking Hammond if he was now “a mental” after the high speed crash which saw him nearly lose his life), the list actually goes on pretty far.

While freedom of speech and expression is certainly something to be celebrated and endorsed, particularly in Britain, perhaps Clarkson has pushed it too far this time around. Going around knocking out producers is something that the BBC would definitely take exception to, and that combined with his track record – and the alleged fact that he is actually a rather unpleasant man to work with – may well be the final chapter in his Top Gear (and television) career…..