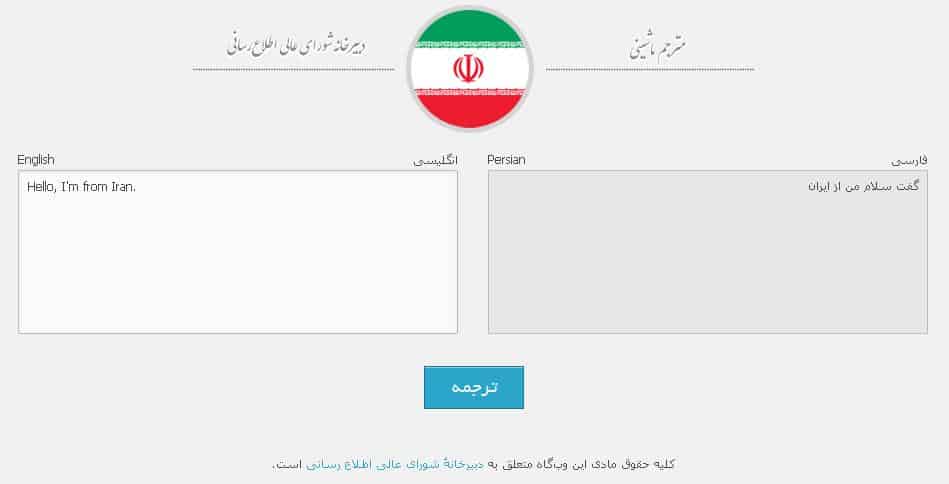 Supreme Council of Information and Communication Technology has launched a new online translation service named ‘Mizan’. Accordingly this service has been created for expediting the process of automatic translations in country. The beta version of Mizan is currently available in MachineTranslation.ir for public use.

Base on the provided information by SCICT, this machine includes around one million words. The translation service is also able to convert sentences from Persian to English and vice versa. However, it seems the project cannot handle even simple translations. When our reporter tried to translate “Hello, I’m from Iran.” sentence into Persian, he received a translation far from the original meaning: “Said hello. I’m of Iran.”

During the recent years, Iranian government has invested much money to reinforce local web services. Currently, Google is dominating Iran’s cyber markets but the local government is not happy with this reality. Many services have been launched in previous years, but none of them have performed noticeably.

SCICT is a governmental organization, which is an active institute in Iran’s cyber space. The organization supervises and supports local online services in Islamic Republic. According to local media reports, SCICT receives direct budget from Iranian government.

At this time, Iran has more than 45 million Internet users. Most of them utilize services offered U.S.-based companies. Last year, Iran decided to block all Google’s service in country.