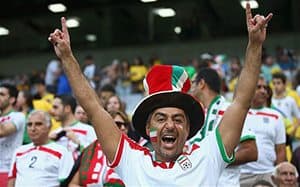 The Iranian Police are due to release the two men arrested for making a video featuring themselves and friends, celebrating their national football side’s admirable display in the World Cup thus far.

The young football fans could be seen singing, dancing, and generally exhibiting enthusiasm towards their fellow countrymen, who are representing them in Brazil with such gusto. The Iran national side has so far held Nigeria to a draw, and were unfortunate to lose out to a sublime Lionel Messi goal in the fading moments of their previous game.

The country appears to have got behind their national team in a way reminiscent of many nations where football is historically ingrained into the lifeblood.

The World Cup has been banned from broadcast in Iran, but many restaurants and cafes in and around Vanak Square, in the capital Tehran, have seemingly taken no notice of the law preventing the tournament from being watched.

Iranian law also bans women and men from watching sports together, this was introduced in 1979 after an evaluation deemed mixed crowds enjoying events together to be un-islamic.

This hasn’t deterred friends – both male and female – from enjoying the games together, with many photos from across Iran appearing all over social media. Although in light of the video celebration arrests, people may need to think twice about being so outward in their enjoyment.

The video has attracted national press coverage in light of the bizarre arrests, Police Chief Colonel Rahmatollah Taheri has publicly declared the video to be “vulgar” and has promised further repercussions for anybody else found to be involved in flagrant celebrations in the country.

Although the women featured in the video were not wearing headscarves – a mandatory requirement in Iran – it is not thought that they are facing any punishment at this stage.

These latest video-related arrests follow the controversy in May caused by six young Iranians seen dancing and laughing to the Pharrell Williams’ song “Happy”. They were released a matter of days later, but the arrests and apparent waste of Police resources on these trivial matters were widely condemned across the globe.

At this stage, the fans that travelled from Iran to Brazil to enjoy their nation’s efforts on the largest stage of all, are not expected to face any repercussions upon their return to Iran.