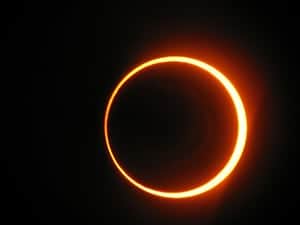 A rare astronomical event took place on Sunday capturing the attention of people all over the world. A ‘hybrid’ eclipse was visible in countries spanning across continents from Africa to the United States. The eclipse was branded a hybrid as it was a cross between an annular eclipse and a total eclipse.

An annular eclipse occurs when the visible diameter of the moon is smaller than that of the sun and so it forms what many describe as a ‘halo’.

A total eclipse occurs when the moon completely blocks out the sun creating momentary darkness.

This event was first visible in the United States in the state of Florida, then moved east across the vast Atlantic Ocean where NASA explained that the greatest eclipsed was noted where a total blackout lasted for around one minute.

In Kenya, the eclipse was completely visible for approximately 10 seconds while the best view of the total eclipse however was sighted in Gabon in Central Africa.

Across the United States and Europe, only a partial eclipse could be seen.

Although a number of eclipses have been treated as hybrid this one in particular was quite a rare occurrence.

Renowned Belgian astronomer, Jean Meeus, noted that this eclipse began as annular then quickly transitioned into a complete eclipse of the sun. The last recorded date that this astral event occurred was in 1854 and will not occur again for over a century.

Typically an individual cannot look into the sunlight without discomfort. This prevents damage to the eyes, however, during a solar eclipse an individual may look into the sun without feeling uncomfortable but this does not mean that damage is not being done. Staring into a solar eclipse may cause permanent damage and even blindness if proper precautions are not taken.

Prior to this event, local experts around the world issued warnings that impairment will occur to the eyes if the eclipse is viewed without special filtered glasses. Alternative methods of viewing an eclipse involve using a pinhole camera, which can be made at home, or watching the reflection of the sun on a pool of water.

Spectacular photographs of the eclipse have been shared on social media platforms from individuals across the globe.

Eclipses are rare, with only a maximum of 5 per year, not all are visible. This eclipse has been treated as the last eclipse of 2013.