How Cashmere Sweaters Threaten To Kill Off Big Cats 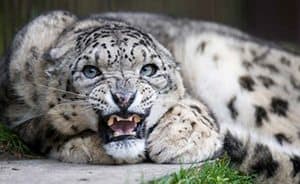 The fragile nature of the global environment is demonstrated by the threat cashmere jumpers are to endangered species like the snow leopard.

Between 4,000 and 6,500 snow leopards live in the wild high in the mountains of 12 countries across Central Asia.

But the demand for wool for fashion clothing is indirectly leading to the unnecessary slaughter of these rare and precious big cats.

Farmers are earning good profits from tending herds of cashmere goats as demand for their wool has tripled in recent years.

Across Asia, farmers have enlarged their flocks to earn more from this trade.

Unfortunately the goats have a predator – the snow leopard. The tame herds are moving into the uplands that are home to the snow leopards, which are simply driven by hunger and instinct to feast on this new source of fresh food.

Anger and profit is clouding the vision of farmers, who are now killing the cats to protect their herds.

The snow leopard is not the only animal at risk from the worldwide trade in cashmere fashion goods.

Antelopes, deer and wild sheep and goats compete with the cashmere goats on the same feeding grounds.

Farmers are also culling these wild beasts to reduce the threat of hunger to their herds.

Ironically, the snow leopards are turning on the cashmere goats because the farmers are driving away or killing their natural prey to make way for the goats.

And so the circle of destruction continues with the inevitable consequence that more must be done to protect the snow leopard.

Herds in Mongolia alone have reportedly grown from 5 million goats in the early 1990s to 14 million in 2010.

The problem is summed up by Charudutt Mishra of the Snow Leopard Trust.

“Farming cashmere is a complex matter,” he said. “The farmers want to earn more money to improve their lives, but their gain is at a cost to the snow leopard.

“They need to understand the problem and everyone needs to adapt farming policies to accommodate endangered species while working to support the financial needs of the farmers and their communities.”

The hope is consumers will only buy products from sustainable cashmere sources that will encourage the farmers to moderate their expansion.