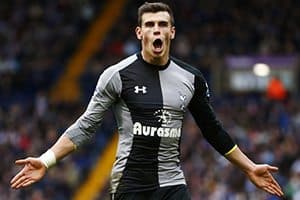 Gareth Bale has signed on as a Real Madrid ‘galactico’ as the world’s most expensive footballer, but what impact is he likely to make in a team of superstars?

Football fans are already familiar with his blistering pace and his ability to bend and blast the ball into the back of the net.

But the worry is how will he fit in at Real Madrid?

At £85 million, Bale out values the world’s former most expensive player, Cristiano Ronaldo, who also plays for Real Madrid in a similar position to Bale.

Manager Carlo Ancelotti was obviously trying out new tactics on the Spanish team’s summer tour of the USA. Several times, Ronaldo moved out of his traditional left flank berth to play in the middle and on the right.

The experiment was hardly a success. Ronaldo has scored almost 200 goals in as many starts for Madrid from the left, but the shift across the pitch does not seem to suit him.

Granted, Bale can play in the centre of midfield and on the right, but that means he has to unseat another galactic. The job may be a little easier now Mesut Ozil has signed for Arsenal.

However, Real Madrid’s policy of buying players is as much influenced by their commercial strategy as their tactics on the pitch.

The rumour is sponsors wanted the team to make room for a British star to give them an impact in a market closed to the galacticos, who mainly come from Latin America and Europe.

Real Madrid are listed as one of the world’s richest clubs, with sales of more than 500 million euros a season – but that also masks an almost equal debt of 600 million euros.

No doubt, the club wants Bale to put shirts on backs at the same sort of rate he demolished opposing teams last season.

Bale has some big footsteps to fill as a galactico – his predecessors include:

As galacticos, the price tag did not weigh too heavy on many of these leading international footballers, and the next nine months will show how Bale may shine among the stars.