The GAP Campaign that is Making Headlines 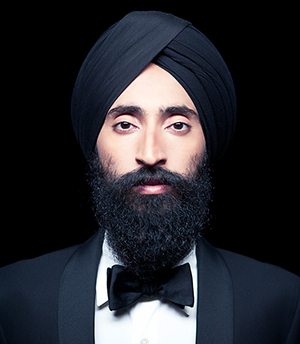 Some of you may have heard of Waris Ahluwalia, others may not have.

Ahluwalia is a jewellery designer for his brand, ‘House of Waris’, in addition to an actor, who has been in a number of films by director Wes Anderson, and his name appears frequently on ‘Best Dressed’ lists for magazines such as Vanity Fair and GQ magazine. Ahluwalia also happens to be a Sikh.

To many this may not be relevant, thanks to his appearance in GAP’s latest campaign, titled ‘Make Love’, it would seem that to many others his religion and his race is a matter of great importance.

Ahluwalia posed alongside celebrated model, and filmmaker, Quentin Jones as part of GAP’s campaign and the image was featured on billboards across the United States.

On one of these billboards, which was located in a subway station in New York, was vandalized. Racial slurs such as, ‘Please stop driving TAXIS’ and changing the campaign title from ‘Make Love’ to ‘Make Bombs’ using spray paint.

A passerby and photographer named Robert Gerhardt noticed the tarnished ad and forwarded the image to Arsalan Iftikhar, who also happens to be an editor at The Islamic Monthly. Iftikhar took to social media channels such as Twitter, and posted a picture of the vandalized billboard and directed his comments towards the GAP’s social media pages.

This prompted the company to respond in a way that many did not see coming.  They replied to his tweet asking for the exact location of the advertisement so they could correct the situation. The company also changed its background photograph to the spread of Ahluwalia and Jones, showing their support for the designer against this racist crime.

Iftikhar took the initiative to open a conversation about existing racism in what many label as the most liberal country in the world.

He said, “‘This whole story just proves that we do not live in a post-racial America yet when South Asians and those perceived to be Muslims cannot even grace fashion advertisements without racial epithets being directed their way.”

This gesture was appreciated by Muslims and Sikhs alike, with a number of individuals and organizations thanking the GAP for their action.

The company received a letter from a member of the Sikh community expressing thanks. It said, “By placing a Sikh model in prominent locations on billboards, direct mail advertising and digital channels, you have raised the profile of Sikhs in ways the community couldn’t have accomplished with its limited resources. The community has tremendously benefitted from the attention it has received through Gap’s marketing campaign.”