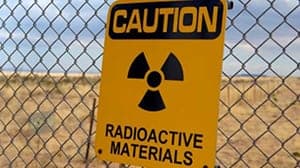 After suffering a terrible earthquake that measured 9.0 on the Richter scale in 2011, Japan faced a tsunami that took the lives of thousands and destroyed the homes of thousands more.

The tsunami also caused a triple meltdown at Tokyo Electric Power Co. (TEPCO) Fukushima Daiichi nuclear power plant. This has had devastating effects on the nation that continue till today.

Since the tsunami in 2011, the plant stored an approximate of 1,000 tanks of contaminated water. This past week, several leaks have been discovered and radiation levels have been found to be much higher than previously anticipated.

The radiation levels were 18 times higher than previously reported by Tepco. One of these tanks had been contaminated to such an extent that if an individual was exposed to the water for 4 hours, it would result in death.

This tank in question has developed a leak and may have found its way through the ground into the Pacific Ocean. It is speculated that up to 300 tonnes of contaminated groundwater has made its way into the ocean.

Not only does this have huge ramifications to neighbouring villages, but also can be very detrimental to the ocean life of that region.

Most fishermen in that region are not allowed to fish and others in further areas are only permitted to catch specific species like octopus. With this new setback members of this industry are furious.

In a recent attempt to assist the process, the Japanese government has allocated 32 billion yen, the equivalent of $500 million, to assist Tepco in cleaning up the mess.

The build-up of the water has reached overwhelming levels and there are now only two viable options to take care of the situation.

The first is to treat the water and reducing radiation to government accepted levels and then release it into the Pacific and the second option is to evaporate the water after treating it.

There is one bright side to this gloomy predicament, the radiation is only limited to beta rays. Beta rays can be easily controlled using special equipment as they can only travel short distances.

In order to be contaminated one must be close to the source. In addition, a thin sheet of metal such as aluminium is enough to block out the harmful rays.

Over the past few years, Japan has been quite unlucky and there are fears that this will not change.

Japan is in the running to host the Olympic Games in 2020 and it is likely that these leaks may scare away their opportunity.

Several government officials have made statements assuring the public that they are safe. Also, Tsunekazu Takeda, the Tokyo 2020 bid chief said in a statement, “The data shows that the radiation level is the same as most cities, like Paris, London and New York.”

The Online Secrets That Everyone Knows