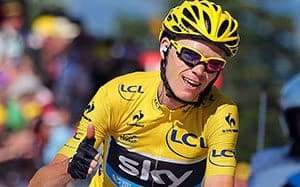 He bested Nairo Quintana of Colombia to the yellow jersey by a margin of 72 seconds.

The final stage was 10 laps of a 7 kilometre course around Paris. Heavy rain meant Froome won the race the first time he crossed the finished line on the course – provided he completed the 10 laps.

He managed to stay on his cycle in the horrendous weather even though he a paper bag and plastic water bottle stuck in his gears.

Although he had to complete the niceties to become champion in Paris, Froome actually won the race a long time back, after the 10th stage.

A fantastic burst of speed and endurance saw him race to the top of mountain La Pierre-Saint-Martin that shattered the opposition and put him three minutes clear of the field.

Although his rivals pulled back some of the time, as long as Froome maintained his momentum and stayed on his bike, realistically there was little they could do to prevent him winning.

After the phenomenal mountain climb, Froome’s haters were out in force accusing him of enhancing his performance with drugs.

He also had to endure spectators throwing bottles, food and garbage at him at various points ion the race.

But he kept his composure, concentrated on his goal of winning and pedalled to victory.

Besides the coveted yellow jersey, three others are awarded in the race:

Quintana won the white jersey as the best young rider. He cannot ride in the category from next year as at 26 years old he will be classified as veteran.

The race started in July in the Dutch city of Utrecht.