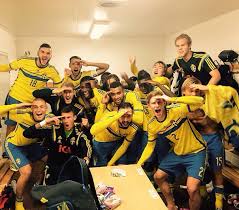 In a humiliating back-fired attempt at arrogance, French defender Layvin Kurzawa has found himself at the centre of a rather amusing #fail campaign on social media this morning.

In the U21 European Championship Qualifiers, Sweden faced France last night in the second leg having to overcome a 2-0 defeat in the first game to be able to qualify for the tournament.

They were on course, leading 3-0 when Kurzawa headed into an empty net late-on to put the French through 3-3 on aggregate, but with the all-important away goal. 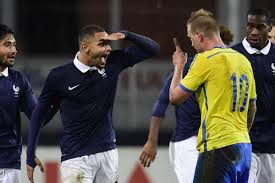 His celebration (pictured) was directly in the face of the young Swede striker, John Guidetti, who was less than impressed. It’s unclear if he was saluting, keeping the floodlights from his eyes, or if it is a derogatory French insult, but it was in the face of another player and was not very professional regardless.

Sadly for the French lad, Guidetti volleyed home a minute later and Kurzawa was made to have a nice taste of his own medicine as Sweden qualified in an amusing turnaround. 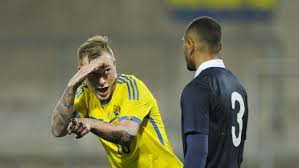 The celebrations after the game went on long into the night, but not before the entire team took a moment to thank Kurzawa for the incentive he offered for them to go on and win. Humility has never been big in France, but maybe Kurzawa will learn that it’s perhaps best to wait until the final whistle is blown before acting like the hero….. Time will tell.

The left back has previously spoken of his desire to join Manchester United, on this evidence, the Old Trafford powers-that-be are unlikely to be picking up the phone any time soon….