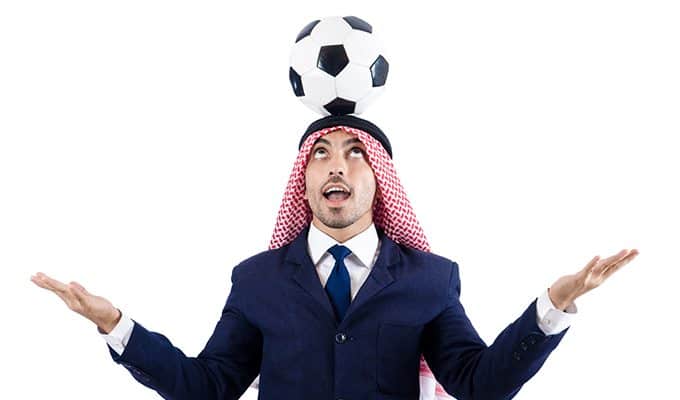 If reports in Spanish newspaper AS are true, we can all pack up and go home now. The Bernabéu, a stadium which has continually hosted the greatest names ever to kick a football, will be renamed the Abu Dhabi Bernabéu.

Abu Dhabi is an oil-rich state in the UAE, which has never continually hosted anyone who can kick a ball. Real Madrid’s home ground will be re-christened in a deal of which the specifics are still to be revealed, but Europe’s football clubs continue to cash in on the rich Arab elite, and their incessant requirement to barge in on a sport which remained loyal to its historical significance for over a century.

You Got No History

With Arsenal, AC Milan, PSG, Real Madrid, Hamburg and the New York Cosmos all sponsored by Emirates, and Arsenal’s ground being called the Emirates Stadium, Dubai has a massive stake in European football already. Its sister state Abu Dhabi – which owns the Manchester City franchise and has renamed the Commonwealth Stadium to the Etihad Stadium, has now secretly sealed a deal with Madrid to stick their name at the start of their stadium for a reported $400 million. You get the impression that the suits on the board of every European football club are doing two things:

1. Laughing at the Arabs who plunge their money into getting their name on shirts and stadiums for prices which are frankly way over the odds.

2. Disregarding football as having any kind of passion or meaning which transcends dollar signs.

Admittedly on the face of it, football is strange. Grown men shouting at other grown men wearing shorts and running around after a bag of air, is a concept which those from other planets would raise an alien eyebrow at. But it has become easily the most popular sport in the world, and unfortunately like everything (politics, music, drugs etc…) when it becomes too popular the wrong people get involved and ruin it for everyone else.

Football died the day FIFA – the most corrupt organisation in world sport – awarded the 2022 World Cup to Qatar, a country with no stadiums, but lots of oil money. The report we all want to see (but never will), would offer us insight into just how much they parted with to seal the most bizarre World Cup awarding in history, but if the Abu Dhabi Bernabéu cost $400 million and probably won’t generate any revenue for the Gulf state, the World Cup must have been five times that surely?

Just So Proud Of Everything We Have Achieved

Even football fans new to the sport are becoming increasingly disaffected by the way in which money talks these days. In fairness it’s not really the fault of the Arabs, they act upon guidance from their western accountants, and their constant need to self-promote and exclaim just how proud of everything they have achieved (which is basically allowing Americans to drill for oil in the 60’s) stems mainly from an indifferent view to the region from the rest of the globe.

Governments and businesses formerly had no choice but to try to cosy up to the countries with oil in the Gulf, despite their intolerable views on women, religion, human rights, crime and punishment, unjustified arrogance and ego, laziness blah blah blah…. but now with the oil price set to rapidly fall further and with fracking technology developing globally (despite the environmental concerns), is it not time for the West to leave them to crack on with it on their own? In the same way that say, Zimbabwe has been cut adrift?

We Got Bored Of Camel Racing

From the Arab perspective, it’s clear to see why they want to get their oily fingers into every possible pie they can, but how long before every Premier League club is owned by the same three or four Arab families?

Football has been through dark times before; hooligan-related violence, stadium tragedies, bribery and corruption, but one could argue that the loss of identity – and sanctity – of the clubs which play the sport so many have loved for years, is the darkest…..