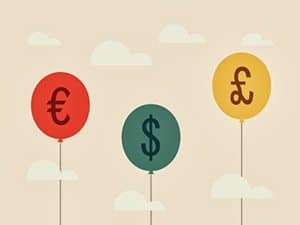 Pension firms are continually warning that foreign currency fluctuations can seriously devalue the spending power of retired British expats – but fail to offer a solution.

Any British expat permanently living overseas drawing on a UK based pension is losing money.

The UK pension will pay out in Sterling and at some time along the way, the expat will have to switch their pounds into the local currency.

This is generally the euro, but could include the US dollar, Australian dollar or other major currency.

This is where the money men take their cut by offering disadvantageous exchange rates or piling on the commission.

So why does a QROPS solve this problem?

Simple. Most QROPS pay out in a choice of major currencies.

Pension benefits go straight from the QROPS provider to the expats local bank account in the currency of their choice.

The transfer cuts out the middle man and keeps more of the cash intact for retirees to spend.

According to The Prudential, this can make a real difference to many pensioners abroad – especially in Europe.

The pound has slipped against the euro over the past year.

The financial firm estimates this has cost British expats around 634 euros in spending power against their state pension in the year.

Exchange rate fluctuations affect QROPS as much as any other investment or pension, but they do beat rival financial products on fees and commission on exchange that erode their value even further.

State pensioners in Europe and countries with reciprocal pension agreements with the UK at least pick up a cost-of-living increase every April, but inflation in the UK is lower than many Mediterranean countries popular with expats.

This means their spending power stand still rather than making any gain.

Paul Fidell, investment expert at Prudential, said: “Retiring as an expat brings a new set of financial problems that relies on the performance of Sterling against other currencies. Inflation and exchange rate movements directly affect spending power.

“Our advice to expats is talk to a financial adviser to see how to time transfers for the optimum rate. Some foreign exchange specialists will also allow customers to hedge against currency movements.”

HTC One Mini Banned From the UK