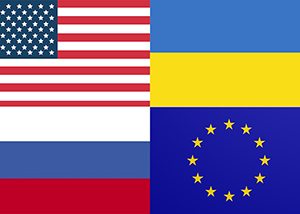 The revolution in Ukraine may have overthrown a president, but it may have also inadvertently caused a new battle against the Russian Army.

Shortly after the former Ukrainian President, Viktor Yanukoych, fled the capital there were unconfirmed reports of gunmen in uniform close to Crimea’s airports. While the men’s identities were unclear, many speculated that the intruders were Russian military.

The former president had fled to Russia where he was kept safe by the Russian President, Vladimir Putin, and publicly stated that he was still the president and condemned all the violence occurring in his country.

The identity of the gunmen were confirmed as Russian military that were deployed to Crimea. With this confirmation, many began to withdraw large funds from their account in preparation for what lay ahead.

The following day on the 1st of March, the Russian parliament approved President Putin’s request to use force inside Ukraine in order to protect Russian interests ‘and those of Russian speakers’, if necessary. As a result, pro-Russian rallies were held in a number of cities and the Ukrainian military was now on full-alert.

The international community immediately spoke out against the use of force against the Ukrainians and US President Barack Obama attempted to convince Mr Putin to remove his military from Crimea.

Obama then said, “The strong condemnation that Russian has received around the world indicates the degree to which Russia is on the wrong side of history.”

Shortly after the G7 released a statement strongly asserting their opinions against the actions of the Russian government.

The statement read, “We, the leaders of Canada, France, Germany, Italy, Japan, the United Kingdom and the United States and the President of the European Council and President of the European Commission, join together today to condemn the Russian Federation’s clear violation of the sovereignty and territorial integrity of Ukraine, in contravention of Russia’s obligations under the UN Charter and its 1997 basing agreement with Ukraine.“

The European Union also joined the ongoing global conversation stating that as the Russian government has not shown any indication that they will respect the UN Charter, they will decide on adequate ‘consequences’ that Russia will have to face.

Claims that Russian forces were threatening and instigating a clash were dismissed by Aleksander Vitko, the chief of the Russian Black Sea Fleet.

President Vladimir Putin seems to be taking all this feedback quite nonchalantly as he has not yet showed signs of reigning his troops back to Russia. However, he has not ordered them to invade either saying that as of yet there has been no need to do so.

He also justified keeping the former president safe only because otherwise he would be targeted by the opposition and killed.

The world watches with keen eyes as this international tug-of-war continues.

How To Claim SEIS Tax Reliefs

Back from the Dead – An Ancient Virus Returns