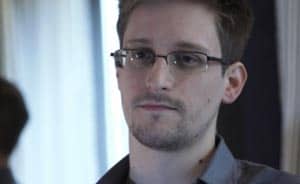 They seek him here, they seek him there, but spy secrets whistle-blower Edward Snowden doesn’t seem to be anywhere.

For the amount of intelligence the US security services seems to process from mobile phone networks and the internet, they seem to be looking for a needle in a haystack when trying to locate Snowden.

Allegedly he has gone to ground somewhere in or around Moscow airport – although he could be literally anywhere by now.

US security services have tried to get their hands on him for more than a fortnight without success.

They somehow lost him in their own country when he quit Hawaii.

Holed up in Hong Kong he gave them the slip.

Now, they have lost him in the maze of Moscow airport.

The latest fallout from the row over whether the US government is right to pursue him has caused rifts worldwide.

Bolivian president Evo Morales is threatening to kick US diplomats out of the capital La Paz after his presidential jet was grounded and searched at the behest of the Americans when flying across Europe.

Snowden was suspected of being on board – but surprise, surprise, he was a no show.

Then UN secretary general Ban-ki Moon made remarks about Snowden releasing classified security information at a speech in Reykjavik, and was criticised by Icelandic MP Birgitta Jonsdottir.

Everyone should assume that Snowden is at large and the Americans have no idea where he is. If they did, no doubt he would be in custody.

Meanwhile, the Wikileaks organisation and foreign governments are running interference for him to mask his real location and movements.

For a nation that trumpets it is the land of the brave and the home of the free, the US seems to routinely infringe the rights not only of US citizens, but those of other countries, in the name of the global fight against terrorism.

While the Snowden manhunt goes on, Private Bradley Manning is about to start the sixth week of his trial for releasing military secrets to Julian Assange of the Wikileaks organisation.

Assange himself is still at large despite the best attempts of the USA and UK governments, even though he is confined to self-exile in the Ecuadorean embassy in London.

Now everyone knows every government is spying on every other government, as if we suspected anything different, the real spies will go back to old-school non-digital communication that sophisticated eavesdroppers cannot intercept.

But will the spying on you and me stop? Not likely.