As flames engulfed the top 30 floors of one of Dubai Marina’s most in-demand expatriate residencies, the Torch Tower, one couldn’t help feel an overwhelming and really rather unfortunate sense of déjà vu.

Back in 2012, fire almost completely gutted the Tamweel Tower in Jumeirah Lake Towers, another large expat-dominated complex just over the road from the Marina. But since 2007, fires in tall buildings across the UAE are actually a shockingly regular occurrence.

The habitual tendency to just mindlessly launch cigarette butts off balconies is indicative of the self-centred nature of such a great deal (not all) of those who move to Dubai to “make it big”.  In this case and the case in 2012, this reckless act was partly responsible for ruining people’s belongings, apartments and lives. But not totally responsible.

Doing it on the Cheap

The inherent requirement for construction companies to cut costs sometimes stretches too far in the Middle East, and it certainly stretches a lot further than the poorly paid construction workers and the terrible health & safety standards they must endure. The trend in the UAE is to sheath every tower built with a highly flammable cheap aluminium panel cladding. Within the panel is insulation made of a massively combustible thermoplastic core. This cut-price material has been banned from use in the UK since the 1980’s, and is more or less banned, but certainly frowned upon, in the USA. This could be the reason why not so many tower block fires are witnessed in London or New York.

It is estimated that around 70% of the high-rise buildings in the UAE feature the cladding, and it is this, combined with a flippant approach toward ashtray use, that has created a surprising number of tower infernos in the UAE since the early 2000’s.

The rapid spread of the fire and the huge bits of aluminium and glass raining down from the Torch Tower, were partly blamed on the high winds caused by a weekend-long sandstorm. History suggests it’s actually just a consequence of setting alight the cladding. Just a quick glance back through some of the recorded fires confirms the trend,  cladding igniting as if doused in petrol, and fire spreading up the outside of the building in a matter of minutes.

The UAE has now passed legislation to ban the use of these highly flammable facades, but this only applies to new constructions. It’s very unlikely that we will see any developers revisiting their finished buildings to overhaul the exterior (this would be far too costly). Estimations are that around 500 buildings in the UAE feature the cladding, and the extra exposure to potential fire.

The Middle East is notorious within the health and safety sector for not quite making it happen. In Qatar there are more than 1,000 fires, the cause of which have never been investigated, and as such not too much is being learnt. The same applies in the UAE. And while the codes, legislation and laws for proper construction (based on copies from laws in the US and UK) are gradually being introduced, like many rules in the region, they can arguably be left open to interpretation. In other words, construction companies can find loopholes to cut corners.

The huge growth and rapid emergence of the Middle East as a desirable place to come and do business/live/come on holiday to, has meant that the buildings go up at quite an astonishing speed, but the regulations just never quite manage to catch up.

Safety of the residents of any city should be the priority, yet in some recent fires no alarms were sounded, while in the Torch false alarms went off weekly to the point where most residents ignored it when it was for real. These high profile fires are now bringing the risk that many buildings pose to the attention of the public, and the world.

It’s not an image that the rulers of Dubai and the UAE will be too keen on. Residents left homeless with no possessions and no insurance is bad enough, but what if the next fire results in large numbers of casualties? For a country and city with such a high level of ambition, and a determination to convince international businesses and workers to come here, the bad press events like this create are most unwanted.

But surely there is only one way to ensure that residents are kept safe from the potentially devastating effects of tower fires. Enforce a law that makes all construction companies revisit and replace the hazardous cladding adorning so many of the residences? Doesn’t seem likely.

Perhaps ashtrays could be dispensed across the UAE and placed on each balcony to stop mindless people throwing their cigarettes over the side, but it probably wouldn’t work. More realistically it is just going to be a matter of time before the next one.

Dubai is aiming to continue to attract global talent to its bright lights, but the bright lights of inferno’s in residential buildings are not going to be attractive to many.

Coincidentally, cladding and bits of buildings were said to be not the only things falling from the sky, as the next day saw hundreds of “500 Dirham notes” scattering across the city of Dubai. Residents scrambled in the streets to get as many as they could, and the videos were very quickly posted on the region’s media channels, and subsequently the world’s. Nobody would dare suggest this was some kind of government publicity stunt to try to deflect the questions relating to building safety in Dubai, but with the revelation that the video was actually captured in Kuwait and not the UAE, it seems strange that the entire world’s media managed to misreport such a basic fact.

Fortune Tower in JLT caught fire during its construction phase, leading to four deaths and 67 injuries.

Cause of fire: Not Specified Two died and 32 were injured as an eight-storey building in Hamdan Street, Abu Dhabi, caught ablaze.

Cause of fire: Electrical fault

Although there were no reported injuries or deaths, 80 people were left homeless on the streets as fire ripped through a 12-storey building in Al Falah Street, Abu Dhabi. 200 families lost everything when the Al Kuwait Tower in Sharjah was completely gutted by fire.

Cause of fire: Gas cylinder explosion Two died in a 15-storey building fire on Muroor Road in Abu Dhabi. Poor building safety was said to have resulted in these deaths. 100 families were left homeless as a huge fire destroyed part of the 40-storey Al Baker building in Sharjah. 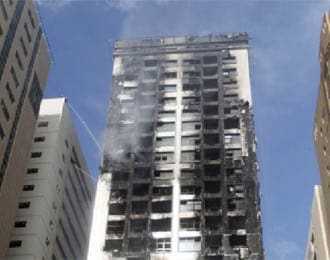 Fire ripped through the Saifa Belhasa building in Tecom, Dubai. Although there were no injuries, 300 people were left homeless. The Tamweel Tower in Jumeirah Lake Towers was half gutted by fire, leaving 160 families without a home.

Three died and eight were injured in Abu Dhabi when a tower on Delma Street caught ablaze in the middle of the night. The men died in their sleep.

Cause of fire: Electrical fault The Torch Tower in Dubai Marina becomes the most high profile tower to be set ablaze, resulting in hundreds of expatriates losing their homes, and great deal of questions relating to how long it will be before the next building goes up in smoke in the UAE. 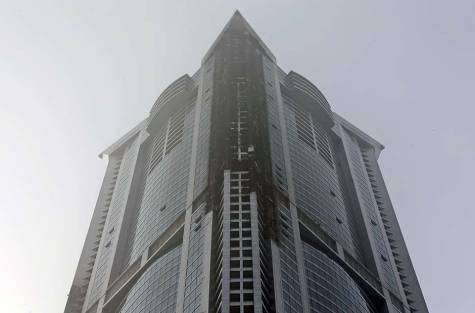 All these fires spread rapidly on the outside of the building, thanks to the cladding. Pars Herald would urge residents to buy ashtrays and refrain from throwing burning cigarettes off their balconies. The buildings, it would appear, are already unsafe, there’s no need to augment the danger…..