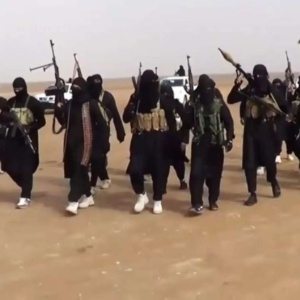 So many cities, towns and villages have fallen to the extremists claiming to operate under the “Islamic State” over the last 12 months, questions have been raised as to exactly why the world’s media are quite so focused on the town of Kobani.

While the town does have a level of significance – it sits on the border with Turkey – it’s by no means the most significant area of conquest for the IS.

The Turkish/Syrian border stretches for over 500 miles, and there have been substantial and very important areas of capture which have allowed the militant extremists to use the border to import weapons, oil, new fighters and other supplies.

Kobani is being presented as a US failure in their quest to use air attacks to wipe out the capabilities of the hopeful caliphate chasers, although the US have previously stated that they don’t have any real interest in trying to prevent Kobani from falling to the IS.

Perhaps the coverage is easier to capture from the vantage point over the town, where bombs can be seen, black IS flags can be focused on and gun shots can be heard, all at a relatively safe distance. Journalists do of course make excellent candidates for the jihadist group to take hostage and eventually behead, so keeping a safe distance from these people is probably wise.

However, the media coverage in the West is almost as one-sided as the coverage across the Middle East and in extremist target nations like Pakistan.

No mention is made of the fact that the UAE – who apparently stand side by side with US in their battle against the IS – have previously been identified by US authorities as huge funders of the group in its early days, and Saudi Arabia, who are also purported to have extended ties to the Islamic State, while also beheading over 20 people in their own country during August alone.

Barbarism begins at home, and while there is no doubt that the moral fibre represented by anything the Islamic State are attempting is intrinsically muddled, some of the facts glaringly missed out by the world’s apparently most prestigious media agencies is frankly disturbing.

Although the IS have been responsible for displacing thousands of Syrians and Iraqis, the Syrian Assad regime has reportedly been responsible for the mass-genocide of 200,000 Syrians during the ongoing internal war, and while the IS have allegedly abducted over 1,000 girls and children in the last six months, the Assad regime have been accused of raping and abducting 7,000 in the few years before IS got themselves together.

These issues are not really deemed as being relevant to news agencies keen on glamourising the new war and setting up station where they hope to witness some late night fireworks. This gives the Islamic State more publicity, potentially more weak-minded support, and simply adds fuel to their rather strange fire. It is time to start asking serious questions about the coverage in the West. The Islamic State is an organisation which stands for something so embarrassingly far-fetched, any sane-minded person would run a mile if approached to join up. But they are gaining in numbers because they are playing the media without it even realising. Their videos released by IS and the celebrity status of the British “Dave” guy who has been responsible for the beheadings, have been welcomed by those blinded by an apparent hatred of the US, and many are brainwashed into thinking this war represents something vaguely glamourous. The truth when they get to Syria is something pretty far removed from that, but as more numbers go over – attracted by what they are seeing – the IS gains momentum.

As well as this of course, they are allegedly funded by US Middle Eastern “allies”. Not much coverage on any of these ongoing issues can currently be found in the press though.