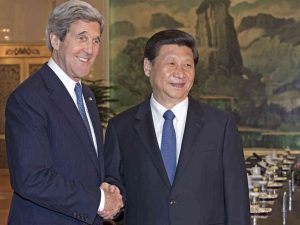 Chinese President Xi Jinping has asked for mutual respect between his nation and the US during the annual US-China meeting held in Beijing.

Any confrontation between the two nations would be viewed as a “disaster” according to Mr Xi, while US Secretary of State, John Kerry, looked to ease Chinese fears that Americans may be out to “contain” their growth as an emerging and powerful nation.

The opening statements come in advance of talks which are set to centre around North Korea, tensions in other areas of Asia (including the South China Sea), and the Chinese economy.

US President Barack Obama stated that his country welcomes a peaceful and stable China, and hopes for a prosperous relationship. However, other prominent figures in US politics are not so sure about the Chinese.

Trouble in the Seas

Disputes between the Chinese and the Philippines, Vietnam and Japan over territory are of serious concern to the US, and the Navy have a historically solid relationship with their Philippine counterparts. The two were involved in military training exercises near an area of disputed waters in the South China Sea just over a week ago, something which the Chinese expressed distaste with.

The anti-Japan stance that has recently been adopted by the Chinese is also raising eyebrows in Washington. Both countries claim ownership of a group of islands which frequent the East China Sea, and Japan have recently given more freedom to their military in relation to engaging in battles overseas. This is resulted in tensions increasing between the two countries.

The US itself has had its share of recent run-ins with China, most notably in relation to alleged cyber-attacks. In May five military officers from China were officially charged with hacking American businesses. This has been vehemently denied by the Chinese, who then launched a counter-claim accusing America of anti-China cyber-attacks.

For now it would seem that Obama’s Welcome Mat may need to be hidden away as stability and peace look to be a way off for the emerging nation.