Charlie Hebdo Goes with the Prophet 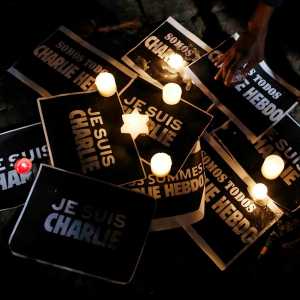 The latest edition of the French satirical magazine, Charlie Hebdo, will feature a cartoon of the “Prophet” Muhammad holding a sign saying “Je suis Charlie” below the words “all is forgiven” and crying.

The defiant cover, and the new issue of Charlie Hebdo has been created by the surviving members of the editorial team who were not shot dead by the two gun men who were on an apparent mission to avenge the deep offence the magazine has caused through its depiction of the Prophet over the years.

The magazine will break all kinds of publishing records as its initial run will be for 3 million. The modestly popular publication usually only runs a print of 60,000 per week. The incident, in which five of the top cartoonists within the magazine were executed, along with 12 other people across the country, has created much debate and numerous stances. Some people preferring the quote “I am not Charlie” rather than the adopted “Je suis Charlie.”

Whatever the stance, there is one thing which can’t be argued, and that is the defiance of a publication so dedicated to what it stands for, and its refusal to be governed by fear of offending people.

The repercussions of offending certain groups were there for all to see last week, and in fact most international publications, despite reporting the Charlie Hebdo cover story as a headline, have chosen not to include a picture of the cover.

After witnessing the cold blooded dedication to avenging the deep offence caused by people drawing pictures in books, most in the media industry have decided that, in this case, although freedom to publish an opinion is something we usually have a right to do, sometimes it’s just not worth it….