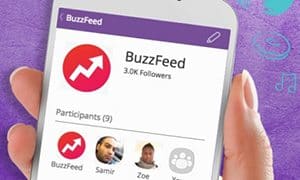 BuzzFeed, the waster’s paradise – where users are force fed lists and top ten reasons why men are rubbish, or your boyfriend is cheating on you, or why we love Breaking Bad as if that’s the answer to something – is bringing its own brand of simplistic, intellect-damaging (I can’t really call it journalism) journalism to the world of instant messaging.

Social media sites such as Facebook and Twitter have seen a huge slow in traffic for a year now on a global scale, and while perhaps they are still increasing in popularity in the Middle and Far East, the US and Europe moved on some time ago, preferring instead instant messaging apps such as Snapchat and WhatsApp. Facebook was the conveyor belt for the BuzzFeed production line initially, but now they are looking to explore the potential of instant messenger apps to bring their lists to the world.

One of the less popular messenger apps is Viber, but hey, everybody’s gotta start somewhere and it would appear that BuzzFeed and Viber have partnered up to bring more lists – like 37 ways to know you are a 2000’s kid (I know one way, check your passport, that should save some time and brain cells) – to a broader range of the unassuming public.

BuzzFeed will have a channel within the app which will have exclusive top 10 lists uploaded to it so as readers can look and discuss within the group. The people who wrote the top ten lists and published them will also be dropping in to chat about the list they made (although probably not about where they source their images).

Public chats were a feature Viber launched in November 2014, and they originally centred around very high profile celebs such as Perez Hilton (the fat guy who is a celeb because he stalks other celebs), Pixie Lott, Paul van Dyk and Tyler Oakley. These high profile faces weren’t quite enough to see Viber’s traffic increase to the levels of say, WhatsApp, but it is hoped by the Viber suits that BuzzFeed – which has a YouTube following of over 4.2 million – will drive people towards the messaging and calling app.

Although it’s very much a divisive website, there is still no doubting the popularity of BuzzFeed. Office managers everywhere probably lose more working hours to it than Facebook nowadays, a trend very much symptomatic of our simplistic and sadly watered down appetite for digestible information.

Although lists are nothing new, having everything written out in a one-to-ten format has never been as popular as it is now, save for perhaps when a man wrote 10 commandments on a scroll and everyone around started to follow them…..