Buddhists and Muslims in Ongoing Clashes in Sri Lanka Overnight clashes have been responsible for the deaths of three Muslims in the south of Sri Lanka, at the hands of Buddhist protestors.

The three men all suffered fatal gunshot wounds as they left a mosque in Aluthgama. The incident occurred just after midnight and was the culmination of hours of clashes which included rocks and bottles being thrown.

The trouble has also accounted for over 80 seriously injured as Sri Lanka witnesses its worst outbreak of sectarian violence in recent memory.

Muslims account for just over 10% of the population of Sri Lanka, with many of the Buddhist majority apparently sympathetic to the cause of the Bodu Bala Sena (BBS) – also known as the Buddhist Brigade.

The revivalist group apparently incited the violence when they marched a rally deep into Muslim territory, dragging Muslims off buses and out of homes before unceremoniously beating them in front of an audience of onlookers. According to eye witnesses, what followed was the subsequent looting and arson of Muslim shops in the area by the gang.

The Police and authorities have come in for stern criticism across the region for their failure to take preventative measures against allowing the BBS to march un-challenged and cause carnage throughout the area. The march, which began as a demonstration, followed a well-publicised clash between some Muslim youths and a Buddhist monk’s driver.

Despite a curfew being imposed throughout Aluthgama on Sunday, members of the Buddhist group appear to be taking the law into their own hands as they were filmed chanting anti-Muslim slogans and generally causing chaos and unrest. Unconfirmed reports have suggested that gunfire and tear gas have been used by security forces in an attempt to restore order. 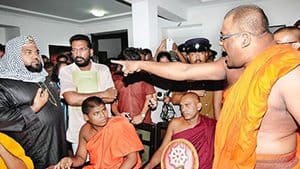 Tensions between the two factions have always been high, with Buddhists accusing the minority Muslim community of having too much influence on the way the country is run, while Muslims criticise the government for not protecting them enough.

Surprisingly most of the anti-Muslim chanting and behaviour appears to have been initiated by Buddhist monks, monks who supposedly commit to a life in search of a state of nirvana – this is a state of perfect peace – and who are unconditional in their quest to extinguish the flames represented by greed, aversion and delusion.