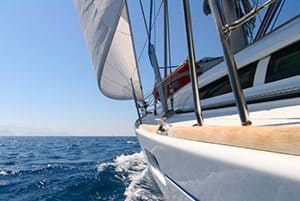 Spending the year cruising the Mediterranean and the Caribbean all-found and with a salary of £2,000 per month sounds like a dream job.

For a rising number of silver service crew, that dream is a reality as billionaire super yacht owners plough millions into shaming their rivals with bigger and better ships.

The current largest super yacht is the £400 million Azzam, reputedly built in Germany for an anonymous Saudi Arabian owner.

The stats are impressive by anyone’s standard –

The Azzam is longer, heavier and more expensive than The Eclipse, the previous world number one super yacht owned by Russian billionaire Roman Abramovich.

However, the builders have kept details of the interior confidential; suffice to say the main saloon is a 29 foot open plan room.

The ship does have a helipad and swimming pools on the top decks.

Despite the global economic downturn, super yacht building is booming.

Boatyards the world over are bursting at the seams as 400 new super yachts with prices starting at £40 million are under construction.

For billionaires, a bigger and better super yacht than anyone else owns is the supreme badge of wealth.

The good news for would-be crew members is these new ships will generate up to 4,000 new jobs.

The need for discrete and professional crew is so high; the Professional Yachting Association has developed a new training course to supply the staff.

The pay and conditions may be good, but the demands of billionaire owners are high.

The billionaires, their families and guests expect the best of the best. They are fastidious about standards and expect their staff to work long hours to provide their every whim.

One super yacht owner expects his crew to even clean the between the tiles in bathrooms with ear buds and bleach to keep the grout gleaming white.

Abramovich’s 533 foot Eclipse super yacht has two helipads and an onboard helicopter hangar. On one deck is an outside 16-metre swimming pool with a bottom that can rise to convert into a dance floor. The Eclipse has a crew of around 90.

Dubai has a swimming pool, a cinema, disco, gym, helipad and an underwater garage for the yacht’s submarine.