European football’s Big Five leagues have netted a massive £25 billion in income from the 2018-19 season.

As the season comes to a close with the Champion’s League Final between Liverpool and Tottenham in Madrid, soccer accounting specialists Deloitte have analysed football finances.

The best attended league is Germany’s Bundesliga, with an average attendance of 43,000 fans at every game.

But the English Premier League generates the most cash with a revenue of  £4.8 billion – 72% more than the Bundesliga, which is the second-placed rival.

Although earnings are rising, profits are falling in the EPL.

The aggregate operating profit of the 20 clubs in the league dropped 16% to £867 million, but this was still the second highest ever profit.

The big difference between Premier League income and that of the other four big leagues is broadcasting revenue, which at £3.2 billion is more than that of clubs in Germany and Spain combined.

Dan Jones, partner and head of the Sports Business Group at Deloitte, said: “European club football is in the strongest financial position that we’ve ever seen.

“This reflects the drive among leading clubs to generate ever greater revenues to fund success on the pitch and the sustained efforts of UEFA to improve profitability and sustainability of clubs through Financial Fair Play and club licensing.

“While the Premier League retains its leading position financially, we expect to see other leagues continue to grow in the coming years.”

Income increased 4% to £749 million but wages grew to 106% of revenue, which Jones explained shows the financial risks clubs are ready to make to win promotion to the Premier League.

How revenues compare for the Big Five leagues 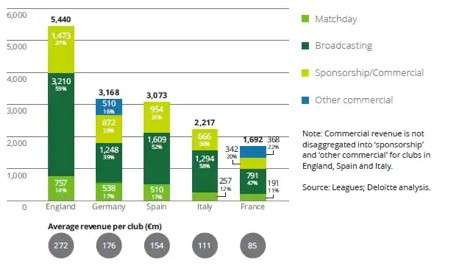