Bank of England: ‘Too big to fail’ remains an issue 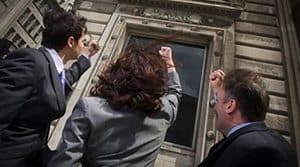 If one phrase sums up the global financial crisis, it might be “too big to fail” (TBTF).

The theory supposes that some financial institutions are so volumous and important to the world’s markets that their failure would be devastating to the economy, and that these institutions must consequently be protected and supported by governments.

The four-word stipulation sums up the state of the financial market, and also the challenge regulators and governments face when trying to create and implement a more stable system.

This September will mark the primary TBTF event – the Lehman Brothers collapse in 2008 – which showed the world the extent of the damage of a major institution failure.

Now, five years after the crisis, a Bank of England deputy governor is warning that there remains global banks which could fail and damage the entire financial system.

Responsible for financial stability within the bank, Sir Jon Cunliffe has stated “I do not think we can say with confidence that we could resolve a failing global giant.”

“Getting agreement on international standards to end TBTF is perhaps the regulatory priority for the [next] G20 summit.”

Cunliffe’s comments echo the fears of many Bank of England officials who note that no major global financial institution has produced a plan in case of failure which meets BoE standards.

In 2013 Paul Tucker – Cunliffe’s predecessor – stated his surprising belief that a giant bank could fail safely, even if the process might be arduous.

Yet many believe even though progress has been made for banks to hold more capital to protect against a collapse, the TBTF problem remains.

“Regulators and supervisors who cannot trust the implementation of standards in other jurisdictions will defend stability in their own jurisdictions by raising barriers,” Cunliffe stated.

And whilst this goes some way to mitigate the risk of global crises, “the cost is the rolling back of financial globalisation, with less effective and efficient intermediation on global savings.”

The comments came ahead of the Bank’s Governor Mark Carney announcement outlining the wide-ranging reforms and staff changes.

Former Goldman Sachs economist Ben Broadbent has been appointed as the deputy governor for monetary policy with the Bank, and Nemat Shafik will serve as deputy governor responsible for markets and banking – the first time in four years a woman has been elected to serve on the Monetary Policy Committee.

Malta or Gibraltar: The QROPS question