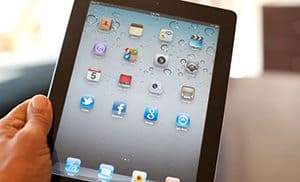 Earlier this week, on Tuesday, Apple revealed its latest product, the iPad Air in addition to the latest Mac computers. They have also made an announcement that their new OSX Mavericks for Mac computers and MacBooks will now be free to download.

The new iPad Air is guaranteed, by Apple, to be thinner, lighter and faster than any other preceding model.

The hardware for this new model is a significant improvement from any before it. Physically it has the same 9.7 inch screen as the fourth generation iPad but it is 0.4 pounds lighter and is 20% thinner. It comes with the same A7 processor found in the iPhone 5S making it 72 times fast than the first iPad that was released a little over three years ago in April 2013. The device now also boasts the sharpest Retina Display screen to date.

Apple isn’t worried about its competitors even though most, if not all, tablets are much more kindly priced. The iPad is still the leader in the tablet market having sold over well over 150 million pieces.

The devices that are created and released by Apple are high-end with lasting quality compared to its competitors and so they feel that the need to push prices down are not pressing.

Although they are not reducing the prices of their new devices, Apple has opted to take a new strategy. They are now allowing Mac computer users to download the latest software updates completely free of charge.

Apple has taken this route in an attempt to get ahead in the software market against its biggest rival, Microsoft Windows, although they won’t necessarily admit to this.

Tim Cook told attendees of the keynote, “We are turning the industry on its ear, but this is not why we’re doing it”, he said, “We want our customers to have our latest software.”

Highlights of the new OSX Mavericks include new features such as tags, which allow you to label individual documents. Apple have also added a new notifications option. iBooks has also been added to the new operating system. Also, iWork suite has now been upgraded to include their rivals leading software applications from Microsoft’s Office.

Although Apple may not feel it, latest reports have shown that the company is losing a certain part of their market share to Android and Microsoft tablets and this trend is expected to continue throughout 2014.

More Espionage Allegations against the NSA