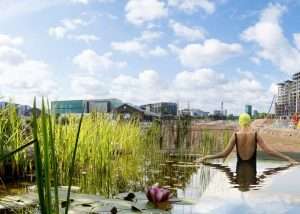 The redevelopment of London’s King’s Cross will feature an outdoor swimming pool filtered using plants and flora, rather than chlorine and machinery.

This water attraction will become the UK’s first and only man-made pool featuring 100% natural cleaning processes. The project is called “Of Soil and Water” and is the brainchild of a Slovenian artist named Marjetica Potrč, in collaboration with Dutch art and architecture studio, Ooze Architects.

The 27-hectare redevelopment of the area has attracted significant praise from local people, with one impressed onlooker stating it will form a “little oasis in the middle of the office blocks.”

Although the site currently represents little more than a building site, the pool will be finished and opened by the first week in May, although the number of swimmers each day will be restricted, taking into account the natural cleaning capacity of the plants living there.

The pool has been built using reclaimed and salvaged bricks and stones, while the surrounding landscaping features a variety of wildflowers and grasses which will react according to the seasonal weather attributes. Natural bathing is all the rage across Europe right now, with esteemed Swiss architects Herzog & de Meuron, completing a large-scale bio-pool last summer near the Alps. Freshwater pools have also been proposed for areas of the River Thames.

The artist Potrč, said “This is a collaboration with nature,” also adding that water is not only a source of life, but also a “metaphor for regeneration.”

Swimming in London received a huge boost in 2012, courtesy of the Olympics, and Luciana Rolesu of Swim London, a swimming school based in the capital, remarked “Creative pools such as this generate even more interest in swimming, and will ultimately remind Londoners young and old, that swimming is a great, fun way to exercise and stay healthy.”

The self-sustaining pool is also likely to spark more interest in sustainability among urban projects planned for the most popular city on Earth, and with ongoing redevelopments constantly being announced, finding a place for concepts such as these should become more commonplace.

If you are looking for swimming lessons for adults or children, contact Luciana at Swim London on 07527 983 983 and receive a free introductory lesson.